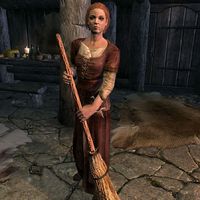 Haran is a Nord food vendor in Winterhold. She and her husband, Dagur, run the town's inn, The Frozen Hearth, where she can be found all day long. At 2am, she sleeps in the inn's cellar along with their daughter, Eirid.

She wears a set of farm clothes and boots. In combat, she will defend herself with an iron dagger. She carries a set of middle-class items and gold. If anything happens to Dagur, she will take over his duties at the inn.

She seems to be quite friendly and she will often remark, "Just say the word if you need a drink or something to eat.", "Something I can get for you?", "If you need a drink, just say the word.", "We may not have as much to offer as Whiterun or Solitude, but we'll do what we can to make your stay a pleasant one." She also does not show disdain towards the College of Winterhold, as she'll tell you, "If you're here for the College, don't let the folks in town bother you. Just try and keep to yourself.", "The Mages at the College keep to themselves for the most part, so we don't see much of them.", and "Most of our business comes from folks traveling to and from the College." She may mention the local drunk: "Ranmir beg a drink from you, yet? That's gold wasted, friend."

She will also tell you the story about Ranmir if you ask her: "One night Ranmir was in here like always, drinking himself to death. When I told him there was no more Honningbrew, that he'd drank it all, he got angry. He ranted at me, how I didn't know what he's been through, how Isabelle broke his heart when she ran off with some thief named Vex..."

She will then elaborate further and tell you that "He said he'd even gone to Riften to try and find the bastard. I think maybe he was hoping they'd just kill him, and that'd be the end of it. Dagur never heard any of this, and I chose to keep it to myself. I'm only telling you so you don't get into trouble. Riften and thieves means trouble. Just leave it alone."

Despite the lack of people in Winterhold, Haran and Dagur still get constant business from the nearby College of Winterhold and Ranmir. She is in need of a favor to help get this Ranmir to pay his tab. If you inquire further about what is wrong with Ranmir she will be blunt and tell you that "He owes this tavern enough coin to burn it down, build it back up, then burn it down again just for laughs. He's had some troubles in his life, but I can't have him drinking here without at least paying back some of the coin he owes." You can offer to talk to Ranmir, which will be replied with "Go right ahead. He just might be sober enough to listen to you." If you instead tell her that you're sorry to hear that, Haran will be optimistic, saying, "I'm sure we'll get our gold at some point. Not like he has anywhere to go." When you've convinced Ranmir and go to inform her that he's agreed to pay his debts, she will be grateful: "Thank you. He's not a bad man, just bad with his coins and his drink. My husband Dagur could tell you stories, there. I have a couple of Ranmir's things that he traded to us back when he was still paying regularly. I say you've earned them." She'll give you a weapon and a piece of armor in return.

Asking her why the place is so empty will cause her to reply, "You mean the inn, or Winterhold? Suppose it's the same answer, either way. Winterhold's fallen on hard times, to say the least. Most folk packed up and left years ago. A few of us are either too stubborn or too crazy to go, so we do our best to make a living." You can also tell her what a nice place she has here, and she'll say, "It's not much, but we get by." and continue with "Very little money passes through Winterhold anymore, but if there's one thing you can count on, it's folks needing a drink now and then."

If you have joined the Volkihar vampiresDG, you will eventually be given a mission to turn a target into a vampire. Haran is one of the three targets for this quest. Vingalmo will inform you that "Haran manages the inn in Winterhold. A forsaken place under the shadow of the mages guild. She will help us keep an eye on the mages." Once you've turned her into a vampire, she can be found greeting you with "My brother/sister in darkness. While it's good to see you, we'll keep up appearances, yes?"

Befriending Haran allows you to sleep for free in a bed at The Frozen Hearth, gaining the Well Rested status.

Haran may discuss with Dagur about various things:

Haran: "I understand Eirid's been playing 'Hunt the Elf' again."
Dagur: "It's just children playing, Haran. I wouldn't fret over it."
Haran: "I'm not 'fretting.' I don't want Eirid playing those sorts of games!"
Dagur: "All right, all right. I'll speak to her."

Dagur: "I understand Korir has been complaining about our customers again."
Haran: "What of it? It's our inn, and they cause him no harm."
Dagur: "I believe he was suggesting their presence causes him harm."
Haran: "Well, then he's welcome to eat and drink at home, isn't he?"

Haran: "Now, even Ramir [sic] can only drink so much."
Dagur: "Let's just keep an eye on his supply. It's such a chore to restock."
Haran: "I suppose that's a benefit to having so few customers."