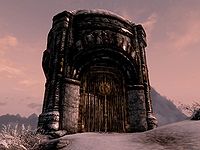 The Alftand Lift to Blackreach

The Great Lift at Alftand is a Dwarven lift to Blackreach located northeast of Nightgate Inn and south of Wayward Pass. It is a mechanical lift which can only be used and entered after starting the quest, Discerning the Transmundane. Inside the lift is a lever which, when activated, will bring you up or take you down into Blackreach. The top-side of the lift is housed in a building surrounded by metal barriers, one of which is a gate. The gate can only be opened from within, by pulling a lever directly to the right of the gate, after which the lift can be entered from Skyrim anytime you travel there (fast traveling puts you right outside the lift).

The map marker for this location does not appear until the lift is activated inside Blackreach.

The lift is Dwemer in origin and is one of seven ways into Blackreach, which must first be entered by traversing the ruins of Raldbthar, Mzinchaleft, or Alftand and using the Attunement Sphere from Septimus Signus to open a door to Blackreach. The lift will open a short distance east of the Alftand Gatehouse inside Blackreach.

The Great Lift is in a fairly isolated location, to the right, half way up the path that leads from Nightgate Inn to Wayward Pass. The lift is on the edge of Winterhold, but overlooks the Pale with its stunning landscape. The inn can be seen to the southwest. To the northwest you may encounter leveled animals, bandits or hunters, often fighting battling each other.

In Blackreach, the lift can be found to the east of Sinderion's Field Laboratory and a short distance east-southeast of the Alftand Gatehouse. Before using this lift to enter Blackreach, you must first lower spears blocking access to the lift in Blackreach, by activating a button on a sculpted metal head in front. Then ride the lift up and use a lever to open a gate in Skyrim. Once this has been achieved, the way will remain permanently available. There are two crimson nirnroot plants; one by the stairs and one to the right when facing the lift. A falmer and chaurus cocoonDG containing a chaurus hunterDG are a short distance in front of the lift, between the lift and Alftand gatehouse.