Before heading to Winterhold to start this quest, you may want to check whether you have enough magicka to complete the quest's first challenge—you may need as much as 135 magicka. With the novice hood found in Helgen Keep during Unbound, even new level-one characters will have 130 magicka. If you do not have other Fortify Magicka apparel or potions, one option available to everyone is to visit the Temple of the Divines in Solitude and activate the shrine of Julianos to obtain 25 more magicka from the Blessing of Julianos. If you have the Dragonborn add-on installed, you may choose the power Secret of Arcana from the black book Filament and Filigree and all your spells will cost no magicka for 30 seconds.

Once in Winterhold, follow the main road west through town, and approach the prominent bridge connecting the town to the College of Winterhold. Standing at the approach of the bridge is Faralda. She will ask you about your intentions and what you expect to find on entering the college. Several options would be available for you.

Regardless of the dialogue options you choose, she will ultimately decide that you need a lesson and will say that you must take a small test to show that you have some degree of skill with magic.

If you agree, she will randomly select one spell from any one of the five schools of magic for you to cast. This may be:

If you do not have the spell she asks of you, she will offer to teach it to you for 30 gold. This is an easy and cheap way to learn any one of the above spells.

You must cast the spell at the circular impression in the floor behind her. Casting the spell in any other location will not progress the quest. However, if she asks you to conjure a Flame Atronach, and you already have a Flame Thrall summoned, simply exiting the conversation and speaking to her again will successfully progress the dialogue.

Alternatively, you can attempt to persuade her and avoid this test. In order to persuade her, you will need a Speech skill of 100 (70 with the Persuasion perk) or an Amulet of Articulation, available only by completing the Thieves Guild questline and becoming Guildmaster. You can also mention that you are Dragonborn if you have completed the requisite quests. She will then ask to see a shout. Either of these will get you in without needing to cast a spell.

Regardless of which path you take, Faralda will allow you across the bridge and direct you to Mirabelle Ervine.

After you speak to Mirabelle Ervine, she will want to give you a tour of the facilities. Before that, however, she will give you three items to wear (although wearing them is not mandatory for membership): a Novice Hood (+30 to Magicka), a Novice Robes of Destruction (-12% to Destruction Spell Magicka Cost, Magicka regenerates 50% faster) and College Boots (unenchanted).

As you follow her around the college, she will point and explain the few areas and what their purpose is.

She will lead you to your new quarters, which is an Apprentice room in the Hall of Attainment, a circular chamber with five rooms total. One room is assigned to each of the apprentices, and one to Tolfdir. Your room is the first on the right, and includes a bed, several furniture containers, and some starting items such as a few soul gems. The furniture containers (wardrobes, end tables, and drawer) are safe for storage, but the food barrels respawn and are unsafe. 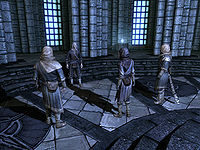 "Welcome, welcome! We were just beginning. Please, stay and listen."

Upon completing the tour, Mirabelle will ask you to join Tolfdir's lecture in the lecture hall. Tolfdir will begin the lesson, addressing you and three of your peers. The other students will badger the professor to teach them a practical application of magic instead of lecturing about the importance of mitigating the damages. Eventually, Tolfdir will ask you what you think. Whatever your response, Tolfdir will ask you to perform a Ward spell. If you do not have this spell, he will give it to you freely. You will be asked to cast the spell and fend off his attack with it.

After you successfully defend yourself from one of his fire balls, the quest is finished, and Tolfdir will suggest a school field trip and you are off on the next quest.

One achievement is unlocked during this quest, When Faralda allows you across the bridge: