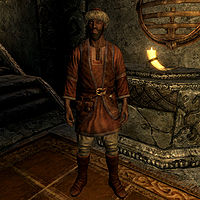 Endon is a Redguard citizen who is usually in the Silver-Blood Inn in Markarth.

Prior to completing Silver Lining, his house is locked and he wanders the streets of Markarth when he is not in the inn. After the quest is complete, he becomes a fence and can be found either in his home or wandering randomly around town (most often either in the plaza in front of the inn or on the stone bridge overlooking it).

He is the husband of the merchant Kerah and the father of the little Redguard girl Adara. He is often seen in the company of his daughter perhaps hinting that the two are close. Conversations between Endon and his family indicate that he also has a son, Cade, who has left Markarth to join up with the Stormcloaks.

Endon does not feel that his family is safe in Markarth and the attack in the marketplace only confirms his fears. After the attack he can be heard arguing with his wife Kerah. She wishes to stay in the city but Endon feels that it isn't safe and wants them to move elsewhere. However, any plans Endon might have to move his family out of Markarth are never acted upon and he can always be found within the city walls.

Endon wears a set of merchant's clothes along with a hat and a pair of boots. He carries the key to his house, Kerah's key, and a selection of upper-class items and gold. In combat, he relies on an iron dagger.

This is the merchandise found in Endon's Merchant Chest, once Endon becomes a Fence. These items are only available if purchased from the merchant; they cannot be pickpocketed or stolen. They are restocked every two days.

Endon may be seen having random conversations with his family in Silver-Blood Inn:
Kerah: "What should we have tonight?"
Endon: "Something simple, a stew perhaps."
Adara: "Stew again, papa? I want steak."
Kerah: "Maybe we could spend a litle bit more and buy some meat, Endon."
Endon: "May be. Let me think about it."

Endon: "Markarth has changed, but the inn is as lively as ever."
Kerah: "The city hasn't changed that much, dear. Some old dwarven stones gathering the same old moss."
Endon: "The stones aren't what bother me, love. The Forsworn are tearing the Reach apart."
Kerah: "Let's not talk about this over dinner."