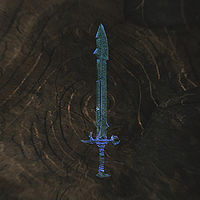 A Drainheart Sword is a translucent Ancient Nord Sword wielded by some of the ghostly draugr found within Labyrinthian. It is a part of a set of similar phantom weapons, alongside the Drainblood Battleaxe and Drainspell Bow. Its physical appearance would be identical to the mundane version of this weapon were it not for its spectral look and the particles that flow out of it while moving with it equipped. A Drainheart Sword is enchanted to absorb stamina for fifteen points upon hit over a period of a second. It is not possible to improve this weapon.