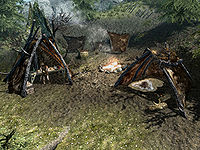 It can be accessed by following the Karth River upstream (southwest) from Dragon Bridge and then descending upon the camp. An alternate way to get there is from Bruca's Leap Redoubt, heading east.

The camp consists of two Forsworn tents, one on either side of a campfire. There are sharpened stakes and stretched hides surrounding the camp and many plants and flowers in and around the camp that can be harvested for ingredients including thistles, blue, red and purple mountain flowers and even the remains of a stump of a huge tree with two patches of mora tapinella fungus growing on it. The camp is home to two Forsworn, one of which is typically found inside one of the tents and the other is typically found on the cliff edge overlooking the town and road towards Morthal. The first tent contains an unowned hay pile, a pair of Forsworn gauntlets, a bottle of ale and two deer pelts. The second tent contains a long wooden table with a tactical map of Skyrim, a Forsworn axe, a random potion of magicka, two bottles of ale, an iron dagger and a leg of goat on it. There is also a novice locked chest in the tent.