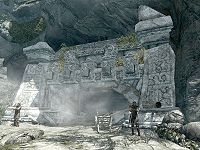 The entrance to Cidhna Mine

Cidhna Mine is a forced-labor prison camp underneath western Markarth containing silver ore veins. The mine has two interior zones: Cidhna Mine and Markarth Ruins. It is owned by the Silver-Blood family and used as a prison to house prisoners for Markarth. The silver ore deposits are mined by the prisoners day and night, who only receive food on a weekly basis when they have met their mining quota.

According to most, Cidhna Mine is considered to be the most feared and secure prison in all of Skyrim.

If you go to the mine as a free visitor, Urzoga gra-Shugurz will talk to you and remind you to keep out. She may tell you something about this mine. "This is a jail, owned by the Silver-Blood family. We use the prisoners to mine for ore. It's the most secure prison in Skyrim. Throw scum in, close the gates. No one gets out." In fact, she and some Silver-Blood guards here are not real guards. The Silver-Bloods pay their wage. Every man is a trained mercenary.

If you are here as a prisoner, you will enter through a double set of locked gates that can't be interacted with, so you can't pick the lock to escape. At the top of the wooden structure there is a ramp down to your right, over on your left is a hay bale. The cavern has three exits, one of which is through a gate guarded by Borkul the Beast. In the center of the area is a fire pit with Uraccen sitting next to it. If you speak to him, you can find a lot of useful info regarding the other residents. There are pickaxes throughout the mine.

Through the gated tunnel to the east, the tunnel takes a couple of turns before you pass a short tunnel to a dead end on your left. This is followed by a locked gate blocking a tunnel to your right that requires a key. It then ends in the room used by Madanach, which contains three sacks of food, a bed that you can't interact with, an empty chest, a chair and table holding a bottle of wine and a honey nut treat. There are two barrels behind the table with two bottles of wine, a bottle of alto wine, a sliced goat cheese, a garlic bulb and a small coin purse. There is also a rabbit hanging above that can be harvested. Nothing in this room is owned and all can be taken without penalty.

When escaping through the previously locked gate near Madanach's room, the tunnel heads south, east, and then south again before you come to a Dwemer door. There are two sacks on your left and the door leading into Markarth Ruins.

Through the door and into the ruins you will see Dwemer architecture all around you. Following the tunnel you will pass a couple of empty Dwemer shelving units, chairs and benches. Eventually the tunnel opens out into a cavern with stairs off to your right leading up to a higher level. You then enter a corridor that turns to the southeast, leads down and then turns back to the north. You will see cobwebs ahead. Passing under the arch there is a spider egg sac. The corridor turns east, then north again and you will encounter a frostbite spider, there is also a spider egg sac that can be harvested on your left. further down this corridor it opens out into another cavern, with stone pillar in front of you. To your left on a higher level is another frostbite spider. You can reach it by going around the right of the pillar and up an earthen ramp to the left. There are stone stairs in the southeastern corner of the cavern, but they lead nowhere.

The exit tunnel is in the northern corner. Follow the twisting tunnel up some stairs to a raised platform which has two leveled dwarven spheres. At the end of the platform is a docking station for a dwarven centurion. There are stairs down to the lower level on the eastern side. Follow them down, but then turn left and under the platform you will find a Dwemer shelving unit containing a potion of minor magicka, a potion of plentiful healing, a Dwemer pan, a Dwemer plate, a Dwemer cog and two silver ingots. Further along the same wall is an unlocked Dwemer chest. On the opposite side of the room is a bench. To continue forward head north up more stairs into the final area with another stone pillar in front of you and an earthen ramp to your right. Follow this up and you will see the exit door to the north.