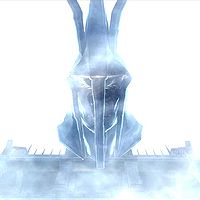 After defeating Jyggalag, a ghostly manifestation of his head will appear and recite a solemn monologue concerning the history of the Realm of Madness, the cycle of the Greymarch and the relationship between Sheogorath and Jyggalag. Defeated, Jyggalag appoints you to fill the vacant Throne of Madness, and departs for the voids of Oblivion, taking the forces of Order with him.

Return to the Palace and speak with Haskill concerning the rewards, benefits and duties of your new station.

Congratulations Madgod: you have completed the Shivering Isles' Main Quest!

Given your new station as Lord Sheogorath, there's some reasonably expected cleanup which does not occur.

The Unofficial Shivering Isles Patch mod fixes most of these problems. 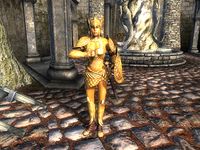