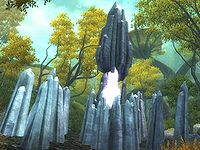 Obelisks of Order are activated by Priests of Order, and spawn Knights of Order when active. Placing three Hearts of Order, taken from the knights, in the obelisk will deactivate it. The obelisks are found throughout the Shivering Isles during the Main Quest. While the obelisks are not active at the beginning, they activate as you progress through the Main Quest. They are all active once you start Retaking the Fringe, only to all be deactivated at the end of that quest. They are then reactivated once you talk to Sheogorath about Rebuilding the Gatekeeper, and remain active until the completion of The End of Order.

Each obelisk is linked to a Crystal Chest and once deactivated they can be used to access that chest, revealing a large quantity of loot (full details on the chest page).

How to Deal With Them

Haskill will tell you that "They can be overloaded and rendered inert by placing the crystalline hearts of the Knights into the obelisk itself... Each heart will increase the power of the obelisk until it eventually overloads and shuts down", which doesn't tell the whole story.

Near every Obelisk will be a Priest of Order, who has a magical connection to the obelisk: until the obelisk is shut down, the priest cannot be killed, but the priest will keep reactivating the obelisk unless killed.

The only way to break the cycle is to knock the priest unconscious and then deactivate the obelisk. Only then can the priest be finished.

Another method is to cast a command spell at several knights. They will attack the priest and the other knights, and will continue to fight even after the spell wears off. This gives you time to deactivate the obelisk and mop up survivors. Alternatively, use the Command spell on the priests themselves, which should prevent them from reactivating the obelisks, as they will be busy fighting their former allies.

It is also possible to kill the priests and then resurrect them using the staff of worms, before they are resurrected by the obelisk they guard. After the reanimate effect wears off they no longer attack you, and actually start attacking the knights of order. After overloading the obelisk kill the now passive priest as they will still reactivate the obelisk.

There are 23 obelisks in all. Three are only encountered at specific stages of the main quest, while the other twenty are located throughout Shivering Isles. They can all be viewed on the SI map, or each individual one's location can be seen by clicking on its map link.

The first 20 can be accessed on the PC by using the console code coc SEObeliskXXExterior where XX is replaced by the number of the obelisk.

This is the activation order as determined in the Construction Set