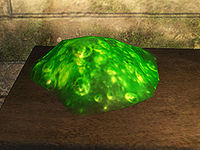 Felldew is a drug extracted from certain Elytra. Ingesting any of the drug leads to a debilitating addiction, the effects of which can only be ameliorated by taking more Felldew.

At least one dose of the drug must be taken to enter Dunroot Burrow during the Addiction quest. During the quest you will obtain the Chalice of Reversal, which is a permanent remedy for the addiction.

6 guaranteed samples can be found (these locations will respawn, since Felldew is food), in the following locations:

Initially Felldew is beneficial, causing two Felldew Euphoria effects. After 45 seconds (real time), one of these wears off. After a further 45 seconds the other wears off and Felldew Addiction begins, progressing through Painful, Wounding and Crippling to Ruinous, each increment taking a further 45 seconds. The negative effects of the withdrawal can be exploited to permanently increase attributes past 100.

Drinking from the Chalice of Reversal eliminates any withdrawal symptoms and causes any subsequent Felldew to bestow even more beneficial effects on the player. It is impossible to become addicted to Felldew after having been cured.

* Applies if you have the Chalice of Reversal.