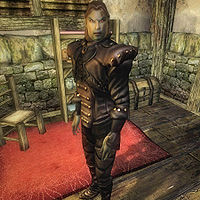 Felas Sarandas is a Dunmer agent living in Passwall. He seems to suffer from mysophobia, and will go to great lengths to avoid anything he deems "sick"; excluding Nanette Don, who shares her house with him. During the main quest he will defect to Order and become a priest. After you complete the Rebuilding the Gatekeeper quest, you encounter Felas for the last time: he will lead a small platoon of Order Knights to the Gates of Madness. Unfortunately for Felas, there is a new Gatekeeper in town.

Due to his fear of germs, Felas keeps his distance from anyone but Nanette Don: he spends his entire life wandering around in her house, at times exchanging rumors with her. At 12pm and 6pm he takes a deep breath and crosses the street for a quick two-hour meal at the Wastrel's Purse. Although he owns one of the beds in Nanette’s house, he never sleeps.

Felas wears a black finery. He carries a small amount of gold and his house key. 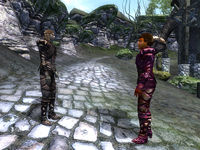 His relaxed lifestyle in Passwall will be cut off when you enter the Isles for the first time. You will find Felas and self-proclaimed mayor Shelden on the road next to the Wastrel’s Purse, busily discussing some newly arrived adventurers:

Shelden: "I tried to warn them."
Felas: "Maybe they're just confused."
Shelden:"They should have listened to me!"
Felas: "We'll be swimming in blood soon. Yuck."
Shelden: "Let's go watch!"
Felas: "Just as long as we don't catch any of their diseases. Adventurers always get strange diseases."
Shelden: "Come on, it'll be fun watching them get knocked around up there. I'll lead, you'll follow."
Felas: "Just don't get any blood on me!"

If you manage to get hold of Felas before the conversation is over, he will prove to be a Dunmer of few words: "I'm Felas Sarandas. Don't breathe on me." You can then ask him about the Gatekeeper and hear a similar brief response: "He's pretty scary, isn't he? Let's watch him in action." On the Gates of Madness he will inform you: "One leads to the lands of Mania, and one to Dementia. The Gatekeeper makes sure no one gets in who isn't supposed to." On his settlement of choice, Felas will reveal that he also went through the strange door and met Haskill: "It's a nice enough place. Less dirty than others. I feel like I belong. That old man, in the room made out of butterflies, he said to wait here." After the conversation, Felas and Shelden will set off at a running pace towards the Gates of Madness, hoping to witness the demise of the unfortunate adventurers.

Near the Gates, you will encounter Felas and Shelden clapping and cheering while the Gatekeeper wipes out the adventurers. During the battle, Felas may comment: "Oh no. They're bleeding all over the place!" and "Yuck. Look at all the blood and gore. I’m getting out of here." Once the adventurers are dead, Felas will turn around and resume his normal life in Passwall. If you approach him, he will greet you differently, revealing more about his germ phobia, using either "Try not to cough on me." or "Try not to stand so close." as polite greetings. He will now offer different and more useful information on the Gatekeeper, unknowingly pointing you towards a local bone-obsessed hunter: "Pretty scary, isn't he? Jayred's planning on killing him. I don't know how... the Gatekeeper looks indestructible to me." Upon exiting conversation we will bid you farewell with more paranoid lines: "I need a bath.", "Don't touch anything!" and "Does the air seem thicker than normal?" Additionally, if he spots you he will comment: "Everything's so dirty!", "Do you really need to get so close?" or a simple "Yuck." After the Gatekeeper has been slain, talking to Felas will have him reveal his intentions on staying in Passwall: "He's dead? I bet he died of some horrible disease, didn't he?" and "We can go in? Well... I better stay here. There's no telling what kind of diseases are floating around in there."

When the Fringe is invaded by the Forces of Order, Felas and the rest of the citizens will have disappeared from Passwall. During your trek through Xeddefen you will meet Shelden who will reveal: "When they attacked, I ran from Passwall. They didn't say a word, they just started killing! The screams! By the staff, you can't imagine the screams! Felas and I slipped down here thinking that we'd be safe. But, no! We landed right in the middle of them! Felas ran off with them and left me to die!" When asked to elaborate on Felas, Shelden will provide some surprising news: "I didn't say they took him -- he went with them! I've heard his voice a few times around here. I think... I think he joined them!" Later on, once Relmyna Verenim has helped rebuild the Gatekeeper, you will meet Felas one last time, this time fully clothed in Order robes. Obviously part of the Forces of Order, he will come running towards the Gatekeeper along with three Knights of Order, fearlessly attacking the Gatekeeper in an attempt to pass through the Gates into the realm. After a brief battle against the new Gatekeeper, Felas will fall to the ground, dead. 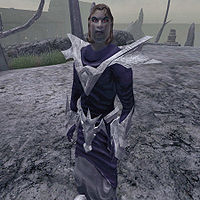 At different stages in the Main Quest, Felas will share different rumors with you and other NPCs:

The Construction Set also lists the following rumors, although Felas will never get a chance to use them: