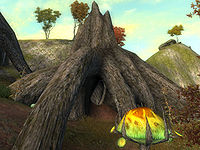 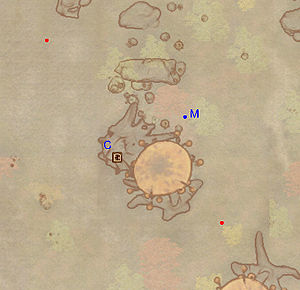 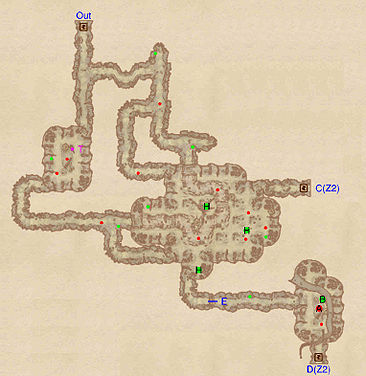 This zone is quite complex, and some backtracking is required to gather all the loot present. At the first intersection, head left and then press on south at the next one. After looting the hollowed stump, return to the intersection and head west: this will take you to the upper level of the large room, allowing you to snipe at the enemies below. Dispatch them and those on your level, and loot the three amber veins (H) present. Head south, open the root door at E and you will arrive in a small room with a boss chest (B) guarded by a boss-level monster (A). Once you're done, proceed to the next zone, Dire Warren, Subterrane, through door D.

When you enter this zone again from door C, which is initially inaccessible, jump down and you will find yourself in the large, central room. Jump down to the lower level and head west and then north, looting the two hollowed stumps you missed out earlier. Avoid the spore pod trap at T and leave through door Out. 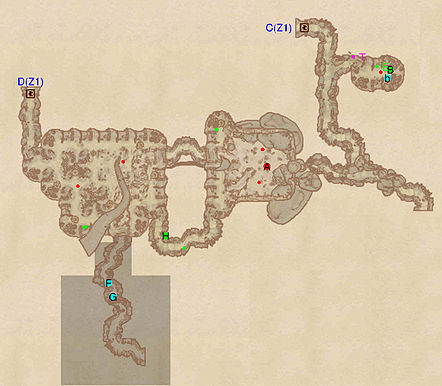 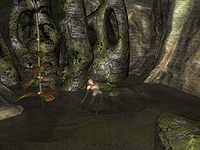 "Traelius! Why do you not come for me?" 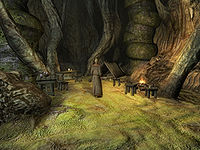 After entering from door D, head down in the stream below, where you will find three glass arrows floating around. Pressing south, the source is clear: near a shot-down Scalon (F), Alyssa's corpse (G) lays on a rock next to her trusted bow Ly'ssane and her journal. It appears that a young couple from New Sheoth established camp here but Alyssa longed for the city life and left. However, she got injured and died of starvation after crawling to end of the stream. As she hints at a location above a waterfall as her lover Traelius's hideout, finding it should be your priority now. Instead of following the stream up to the north, climb back up to the first room and take the tunnel in the southeastern corner, which will give you access to an amber limb (H).

The waterfall is now in front of you, guarded by three monsters, including a boss-level Scalon (A). Before attempting to scale it, don't miss the hollowed stump in the northwestern corner. Getting up to the top can be quite hard, use the rocks on the northern side, which can be easily accessed from the hollowed stump, to then jump onto the main waterfall. Near the chair mid-way up is a bronze necklace. Jump from ledge to ledge until you see an opening in the rock, which leads to the camp. Follow the stream and head left and then right. Here is Traelius, with a root spikes trap (T) protecting the entrance. His high aggression may cause him to attack you, so be prepared. His abode contains a boss chest (B), a bedroll (b), a full set of apprentice alchemical equipment and a few ingredients (E). Head out and use door C to return to the first zone.