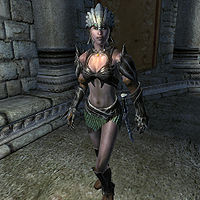 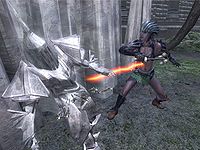 Autkendo Jansa is a Dark Seducer Officer and Captain of the Palace Guard. If you are the Duke or Duchess of Dementia, she will warn you of Jyggalag's attack on the Palace and aid you in the following battle.

She is enabled at the beginning of the related quest and will then be disabled once it is complete. After storming in the main hall, her messenger will immediately greet you and inform you about the attack the forces of Order have launched. If you comment to the Autkendo that nothing is required of you she will humbly say "Of course, My Lord. I meant no disrespect. My zeal in the Realm's service got the better of my judgment. The situation is this. An Obelisk of Order has activated in the Palace courtyard. My Mazken are engaging the Knights as we speak. We will defend the Palace to the end of our strength, and will cast ourselves in the path of cursed Jyggalag himself should he come here."

If on the other hand you ask her for an explanation she will fill you in: "Order. An obelisk has activated just outside the Palace. I've ordered my Mazken to engage the enemy. I expect that this is the beginning of the final assault. The cursed usurper Jyggalag himself may even take the field before the end. What are your orders, My Lord?"

She will then follow you outside in the courtyard and fight alongside you, rushing to attack the new Obelisks as soon as they appear. Even though she is a trained soldier, when Jyggalag himself begins to appear on the battlefield she will simply stare dumbly as he takes on form. Suddenly, however, Jyggalag will cause an explosion that will kill her and her fellow Dark Seducers, leaving the player to fight him alone.