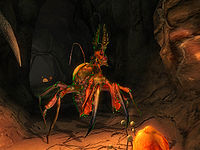 Make your way to the House of Mania and speak with the Duke, Thadon. He requests, in a round-about way, that you retrieve the Chalice of Reversal for him. Thadon seems to be too inebriated to coherently tell you where to find it, so speak with his steward Wide-Eye, who will be standing close by.

She informs you that the Chalice is kept in Dunroot Burrow and notes that it is curious Thadon should require it. Suddenly, she comes to the vivid realization that this is a quest for you as much as it is for Thadon: you must ingest Felldew to enter the Burrow. If you persuade her to a disposition of 70 or greater, she will tell you that Felldew is a highly addictive drug, produced by a particular variety of Elytra that inhabit the Burrow. Kithlan, of the House of Dementia, can also provide some background lore behind both the Chalice and Thadon.

The Dangers of a Drug

Travel to Dunroot Burrow, which is located near the northern-most section of the Overlook Road. Kill the Elytra at the root door entrance and take the Felldew from its corpse. All Elytra that carry Felldew have a green-glowing, shimmering effect. Ingest the Felldew and you will receive a temporary stat boost, as well as the ability to open the 'Barrier Membranes' that protect Dunroot Burrow. You will also instantly become "addicted" to Felldew and, shortly after each dose, the effects will wear off and you will suffer from "withdrawals" if you don't consume it regularly. For full details, see this page.

What A Long Strange Trip

Make your way through the first four zones of Dunroot Burrow, eliminating any Elytra along the way. While it is possible to sneak past the Elytra, killing them will yield additional sources of Felldew, lessening the effects of the Felldew withdrawal. The Burrow itself appears to be an Elytra hive that continually descends into the ground until reaching the fifth zone: The Sanctum of Decadence, a single massive room reminiscent of a temple-like ruin. Proceed into the Sanctum, where the Chalice is located sitting atop a pedestal in the middle of the room.

The Sanctum is inhabited by two 'Felldew Addicts' and a named NPC, Joofy the Brown. All three are unarmed but hostile. It is possible to avoid all three NPCs and take the Chalice. However, this is difficult, and further compounded by high light levels within the room and the constant moving of the Addicts. Try waiting until late morning, since the addicts sleep between 8am to noon. Otherwise, simply kill them and retrieve the chalice from its pedestal. Exit by using the door to the right of the bedroom area. This leads directly outside, at the bottom of the Jester's Spine Mountains. Taking the Chalice will remove your Felldew Addiction and restore any lost attributes.

An Obelisk in the Way

Shortly after exiting the Burrow, an Obelisk of Order will activate a short distance away. While it is not necessary to shut down the Obelisk, doing so may yield some loot, as well as provide some experience for later quests.

If you opt to shut down the Obelisk, place three Hearts of Order in the Obelisk to deactivate it. These can be obtained either by killing the Knights near the Obelisk, or if you still have them from a previous quest. The Priest of Order attending the Obelisk must be killed prior to placing the third Heart or he will simply reactivate the Obelisk again.

Return to New Sheoth and present the Chalice to Thadon, who will grant you membership in the Court of Mania, thus completing the quest.