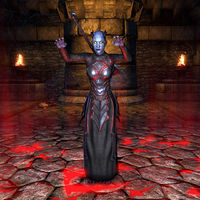 As they are considered Daedric enemies, Xivilai are especially vulnerable to Fighters Guild skills.

A basic melee attack that does minor physical damage

A charged melee swing that does moderate physical damage as well as rooting the player for a few seconds. This attack can be blocked to set the enemy off balance.

The enemy raises its arm to call down lightning to strike the area around it, as indicated by red circles. This attack does moderate shock damage.

The enemy sends a fire line towards its target. This fire line does moderate flame damage to all opponents hit by it. This spell can be interrupted to set the enemy off balance or simply avoided.

The enemy may summon a Daedric servant, such as a Flame Atronach or a Clannfear, to assist them in battle. Killing the Xivilai will banish the summoned Atronach or Clannfear.