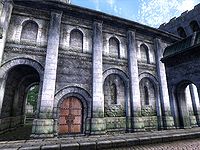 Wumeek's House is located in the southern quarter of Elven Gardens District, next to Fathis Ules' House.

Wumeek's house contains the usual clutter and ingredients, but also a few items of interest. On the ground floor, you'll locate an impressive amount of cheap wine.

In the outer sitting room on the second floor, an unlocked chest reveals two or three pieces of randomly chosen iron or steel equipment. The master's suite itself holds a locked chest near the bed with a chance of some arrows, jewelry, gold or silver. On the floor, you'll locate some spare clothing, and mysteriously, a set of white mage's robes. On the bookshelves, you'll find three magical scrolls: One of absorb fatigue, one of bound axe and one of absorb intelligence. On the same shelves a love letter suggests that Wumeek might have a secret admirer somewhere, and another letter suggests that he actually did something about it.

The basement holds the usual clutter as well as no less than four samples of watermelon and at least five pumpkins.