It Smells Fishy, but It Ain't Sticks

Rumors in Leyawiin indicate that there are strange animal noises coming from the house of Rosentia Gallenus. Upon entering her home, you will immediately find four 'Everscamps' hissing around the house. These are really just regular scamps that don't attack or do anything else other than hiss at you and have a different name. Rosentia tells you she has bought a Daedric staff recently and that is what's causing the trouble. She translated and read the "nonsense" word written onto the staff in runes, thus summoning the Everscamps. Now she is unable to get rid of the staff or the scamps. The scamps are not harming anyone and, if attacked, are easy to kill. However, they will reappear shortly thereafter. Rosentia will then send you over to the Leyawiin Mages Guild to talk to Alves Uvenim, whom she says will be able to help her get rid of the scamps. 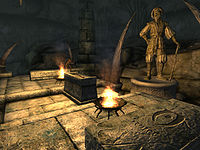 The hidden Altar of Sheogorath, long forgotten in the depths of Cyrodiil

Alves tells you that someone needs to take the Staff to the bottom of Darkfathom Cave and leave it at an altar. Easy enough — except that the Staff has a nasty little enchantment that slows you way down (by 20 points— not to mention being trailed by four Everscamps). So get some Potions to bump your speed. Otherwise the fights in the cave will be very difficult. Head to the cave, located to the immediate east of the city. Once inside, proceed with caution, and take out any enemies encountered. Be warned that the scamps can get quite annoying by blocking your way and also lowering your framerate. At the end of the cave you will find a large altar to Sheogorath that has been long forgotten by the ages. At this point you will get a message stating that you are no longer compelled to hold onto the staff. Approach the altar, bring up your inventory and drop the staff. A message will come up saying that you have finished the quest. Return to Rosentia's house and she will thank you and reward you with the Ring of Eidolon's Edge. This is a ring that grants a level dependent constant bonus to both blade and block.

When Rosentia asks whether you are ready to undertake the task, say "Not yet." Go to Darkfathom Cave and kill all the critters in it. Travel back to town and tell Rosentia that you are now ready to get rid of the Staff for her. Then travel back to Darkfathom, stroll through the empty cave, and drop the staff near the altar to Sheogorath. However, if you wait more than three days before returning to the cave all the creatures will respawn and you will have to kill them again.

Another option is to just sneak your way through the cave, drop the staff and sneak out again (provided you have the skill/gear needed to stay undetected). The presence of the scamps exacerbates the difficulty of this option, as they will follow you regardless of sneaking and may provoke fights with the other denizens of the cave.