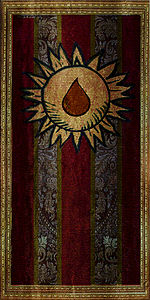 Tapestry in The Order of the Virtuous Blood HQ

The Order of the Virtuous Blood is a citizen's group in the Imperial City Temple District dedicated to combating vampires.

The effectiveness of the Order of the Virtuous Blood at vampire hunting is questionable. Initially, the head of the order is himself a vampire. The order will happily invite characters who are vampires to join their order. They claim to be seeking out vampires, but apparently have never found the rampant vampire activity under the city (i.e., in the sewers under the Arena district). They haven't found out about Jakben either. They freely admit that they are too weak to actually fight vampires themselves. Their only means of combating vampirism appears to be the 250 gold reward they will provide to honorary members of the order. Players can take advantage of this, assuming they have completed the Mages Guild quest, by using the Enchanted Chest.

Characters can become an Honorary Member of the Order (the sole rank Brother or Sister depending on gender):