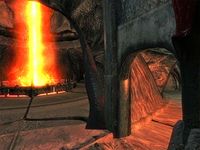 There are two passages leading to a door, immediately left and right from the entrance.

The Flesh Spire is a large Sigil tower, and one of five randomly chosen Sigil Keeps.

This tower can be visited when accessing the Main Tower from Oblivion Worlds 1, 3, 5, 6 or 7. In order to reach the Sigil Stone on top of this tower, you are required to pass through several hallways before reaching the Sigillum Sanguis. Loot can only be found in the Dead Halls and the Sigillum Sanguis.

This tower consists of four levels. One ground level and three upper levels. When entering, you can turn right or left and head to the nearest door. That way, you will only encounter one Daedra. Although the two different direction you can choose are very similar, both paths will not cross until you reach the Dead Halls.

There is little else at this level other than a Blood Fountain at the far end of the chamber, but crossing the chamber will likely alert the other Daedra on this level.

The next level consists only of a small platform, with a Daedra, you have to cross to reach the door to the Dead Halls.

On the third level you can choose whether to go left or right, but both paths join together after a ramp leading upstairs. At the top you can find a single Dremora and the door to the Corridors of Dark Salvation.

When you reach the upper level, you'll need to walk the winding ramp upstairs. After encountering two Dremora on the way, you will reach both doors to the Sigillum Sanguis. 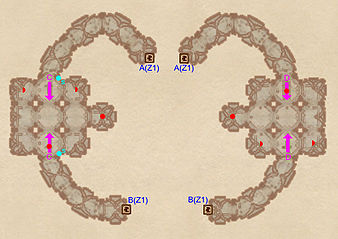 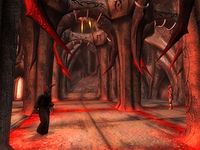 One of the two big rooms in the Rending Halls. 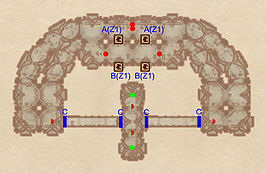 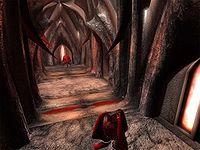 After you enter these halls you can either use the eastern or western route, but both result in the same destination. After you reach a small you can take a detour through the small corridor. You can find two The Punished in the middle room you arrive in. 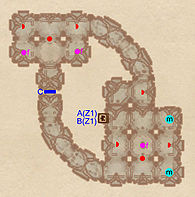 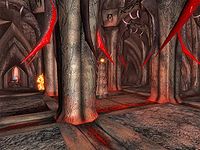 You can use the pillars to avoid the Fire Turret projectiles.

Ascend through these corridors with caution. The projectiles fired by the Fire Turrets can be hard to avoid while confronting the Daedra here. There is little else of interest, other than the two Magicka Essences upstairs. 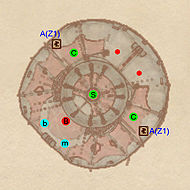 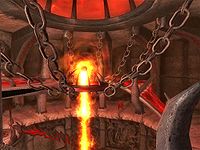 An overview of the Sigillum Sanguis.

Ascend the ramp and pass through the opening to find yourself in the room that contains the Sigil Stone. Here you can find two Daedra. You can find a Magicka Essences, a Blood Fountain and two boss-level The Punished on the upper levels. Be careful if you are sneaking that the Daedra can spot you easier than that you're used to, due to the openness of the area. Once you have reached the top you can grab the Sigil Stone to close the Oblivion Gate.