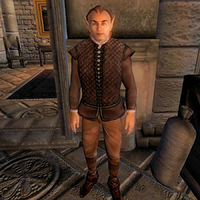 Thaurron, a Bosmer mage, is a Journeyman of the Mages Guild who sells spells at the local Anvil Guild Hall. He is probably the only man in Cyrodiil to have managed to tame an Imp. His pet, Sparky, can be seen constantly following him around.

He lives an uneventful lifestyle, eating only once a day, at dinner, from 9pm to midnight, and sleeping in his bed in the Living Quarters from 3am to 8am. He will spend the rest of his day wandering around the Guild building.

When you meet him for the first time, he will briefly introduce himself: "I greet you. Thaurron, Journeyman of the Mages Guild." Just like fellow Guild member Marc Gulitte, he's quite happy with Carahil's leadership of the chapter: "Carahil supported Arch-Mage Traven's appointment from the beginning, and I don't believe the rumors that she just wanted his job at this hall." If you haven't joined yet, he will give you some advice: "Any of the local guild heads can get you into the guild. If you're in a hurry, speak with Carahil. She should be somewhere around here."

Unlike others, he doesn't think that Anvil and the countryside surrounding it are without any action: "I believe some people think of Anvil as a slow, sleepy place compared to eastern Cyrodiil, but there's plenty of trouble up north to be found." One of those perils is Malacath's Shrine, and once you have read Modern Heretics or spoken with Ulene Hlervu about "Cheydinhal", a new "Daedra shrines" conversation topic will appear. When you speak to Thaurron about this, he will say: "There's a Malacath Shrine west of Fort Sutch, west of the Gold Road to Hammerfell. But I stay away. I like my skin on the outside, in one piece." and then mark the shrine's location on your map.

He wears middle-class attire, consisting of a quilted doublet, tan linens and a pair of doeskin shoes. His only other possession is a small amount of gold.

He doesn't wield any weapons, relying instead on a set of basic spells from all of the magical schools. These are the same spells that you can buy cheaply from him, since his Mercantile is a mere 15. He will always be available for bartering when not sleeping or eating.