A Khajiit named S'drassa at the Leyawiin Mages Guild wants you to bring him rare magical crystals known as Garridan's Tears. He usually jumps at the topic if you agree to hear his story in a little bit of more detail when you speak to him for the first time. 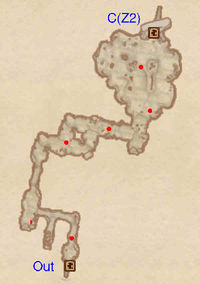 S'drassa suggests that you begin your search by seeking out and asking Julienne Fanis at the Arcane University about the tears. For the duration of this quest, she will relocate from the Lustratorium, the university's Alchemy center, and can instead be found in the Arch-Mage's lobby all day. In conversation, apart from offering to tell the tale of Garridan himself, Julienne mentions a book called Knightfall she once read, which she believes may be able to give you further evidence on the subject. You should find a copy at the First Edition bookshop in the Market District of the Imperial City.

After reading Knightfall, you learn about Frostfire Glade—a frozen, unbearably cold area—which is where the tears are. The glade is entered by opening a magically sealed door at the back of the Frostfire Glade cave. In order to open it, you must have Refined Frost Salts.

Go back to Julienne Fanis, and speak to her about what you have learned. Fortunately, she stocks a few samples of her own self-made Refined Frost Salts, which you can purchase from her. At least one sample is needed to access Frostfire Glade during this quest. If you are a member of the Mages Guild with access to the Arcane University, it is also possible to find one sample of Refined Frost Salts on a table in the back of the Lustratorium. However, taking this sample counts as stealing (which will get you suspended from the Mages Guild if you are caught). The stolen sample is otherwise identical to a purchased sample, and will allow you to continue the quest.

This step is optional. After you've finished your business in the Imperial City, travel back to the Leyawiin Mages Guild and find S'drassa. Talk to him about what you have read in the book and, perceiving the danger you are exposing yourself to, S'drassa will offer you, free of charge, Philters of Frostward—5 immensely powerful Resist Frost potions—to protect you from severe cold within Frostfire Glade or to earn you a good deal of money, should you choose to sell them instead. 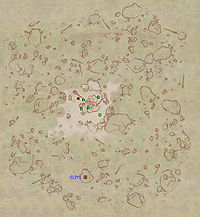 Make your way to the Frostfire Glade cave, which is northeast of the Imperial City or southeast of Bruma. A map marker showing the exact location of the cave will be added to your map as soon as you read Knightfall. The cave is like a passage between the outer world and the actual glade. Claw your way through a few wild animals to a secret door. Use the Refined Frost Salts to unlock it and enter Frostfire Glade.

The glade is guarded by a single leveled Frostfire Atronach Glade Guardian who won't hesitate to pick a fight. As with all frost atronachs, he is immune to frost and poison but weak to fire; be cautious with spells because he has a 15% chance to reflect spells.

After the guardian is slain, proceed to the center of the glade and search the misty area for Garridan's Tears. As you would expect from reading the book Knightfall, the icy mist inflicts Frost Damage each second the player remains within its reach. Use the 5 bottles of Philters of Frostward that S'drassa gave you, or any other spell, potion, or enchantment that provides Resist Frost or Frost Shield protection. Alternatively, use a telekinesis spell to move the tears out of the danger area before picking them up or use Spell Absorption to offer a chance at avoiding the spell.

The locations of all five tears are indicated on the above map with green dots. Note that one of the five tears is actually located on the elevated stone in the middle, hidden under snow. It can sometimes fall in between the nearby rocks.

To locate the tears more easily, aim at the ground until you see the cursor shows the hand symbol.

Using Night-Eye can aid in finding the hard-to-spot tears, by changing the contrast so that the tears no longer blend in with the ice and snow. Lighting a torch or casting a Light spell may also help by reflecting light off of the tears, making them more easily distinguishable. 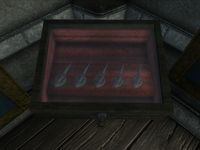 Tears in the display case

Return to S'drassa for a leveled gold reward (see chart) as soon as you're done. The reward is determined by your level when the tears were collected, not your level when you talk to S'drassa; if you level up in the time between collecting the tears and talking to S'drassa, you will not receive any additional gold.