Undead creatures consist of various forms of reanimated corpses and spirits. The undead on this page are also all listed in the Oblivion-Creatures-Undead category. Information on locations where undead will be encountered is provided at Undead Dungeons.

There are three main classifications of undead:

All undead are immune to poison, and resist frost to varying degrees. Undead cannot be drowned: they all have either Water Walking or Water Breathing as a permanent ability. Their fatigue cannot be damaged or decreased in any way. All undead are affected by Turn Undead, but are not affected by Demoralize.

Most undead creatures can be summoned; a complete list of summonable undead is provided under Summons. Necromancers are very likely to summon undead, and necromancer dungeons are frequently inhabited with undead (except for liches); necromancers will not attack these undead, because they are both part of the NecromancerDungeon faction.

The following table summarizes the vast majority of the leveled lists that are used to generate undead creatures. There are a few minor variations, such as liches not always appearing in leveled lists; the notes below the table provide details on such variations.

Bones-type undead creatures include all skeletons and all liches. All bones undead drop Bonemeal.

Skeletons are encountered at all levels. They rely upon weapons for attacking. Standard skeletons all come in both melee and archer varieties; the melee varieties are about twice as common. All skeletons have the following resistances and abilities:

Liches are generally only encountered at high levels; Nether Liches are somewhat weaker than standard Liches. They rely upon magical attacks, both from their staves and from their spells (which are generally randomly determined). They will also usually summon an undead underling. All liches have the following weaknesses, resistances, and abilities:

This is a summary of information on Liches. See the main Lich article for more detailed information.

Ethereal undead include all ghosts and wraiths. All ethereal undead drop Ectoplasm. They all have the following resistances and abilities:

There are a couple of exceptions, where the exact value of the resistance is not 100%.

Ghosts are encountered at all levels; ancient ghosts are a somewhat stronger (more health, more powerful attacks) version. Ghosts rely upon magical attacks, in particular Frost Damage. They have both touch and targeted attacks; the touch attacks are considered Lesser Powers, and are therefore unaffected by Silence effects.

This is a summary of information on Ghosts. See the main Ghost article for more detailed information.

Wraiths and all of their variants are often encountered throughout the darker parts of Cyrodiil. Wraiths are categorized into the weak Faded Wraiths, common Wraiths, and the far more powerful Gloom Wraiths. The higher level the wraith, the higher their health and the stronger their spells.

All wraiths have a powerful curse that they can cast on you (effects vary with type of wraith) that is immune to silence. Most wraiths have several additional spells, in particular Frost Damage and Silence spells. In addition, about half of all wraiths carry a sword.

This is a summary of information on Wraiths. See the main Wraith article for more information. 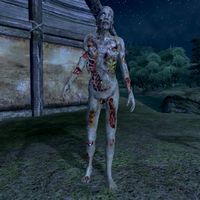 Zombies are reanimated corpses. They have mottled, muddy green flesh, various deep and fatal-looking wounds, and they are often missing an arm. Zombies can be deceiving for players having not encountered one before, as they can run and give chase, and have a distinctive groaning voice when they detect prey.

This is a summary of information on Zombies. See the main Zombie article for more detailed information.

These creatures are all already dead, and are mainly of interest because of the possibility of finding loot on some of their corpses.