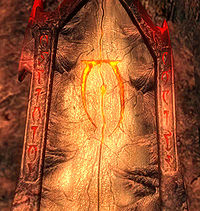 Door to the Main Tower. The text translates as "Oblivion Awaits"

Every Random Oblivion World contains a tower that serves as the citadel of that world, the Sigil Keep. This means that the player eventually has to visit this tower in order to close the Oblivion Gate the player has entered. This tower contains the Sigil Stone that keeps the Oblivion Gate open. The Sigil Keep is generally the largest of the towers; it can often be recognized by the yellow light emanating from the Sigillum Sanguis at the top of the tower.

The basic layout for this type of tower consists of a tall open base that leads almost to the top. There is no direct route that leads to the top, instead you have to pass through various hallways that circle around the base of the tower to reach the top. At the top there are always two doors leading to the final hall, the Sigillum Sanguis, the top of the tower.

The base of the tower consists of a tall spire. Apart from the ground floor, there are various platforms attached to the walls. In the middle you can find a pool of lava with a fire pillar leading upwards (to the Sigillum Sanguis). Coming into contact with the pillar or the pool of lava results in an instant death.

The map of this zone can be confusing, because it will show a good number of doors, even though when you look around you only see two or three doors. The map is showing all the different vertical levels of the tower squashed together onto a single map. Each ring on the map represents a different vertical level, with its own entrances and exits. It is generally easiest in the main hall to ignore the map, because it does not provide you any information on how to ascend, which is your objective.

The number of additional hallways in the tower vary between 1 and 3. They are usually named Rending Halls and Corridors of Dark Salvation (and to a lesser extent Dead Halls and Desolations End). The hallways usually consist of corridors leading you upwards, suggesting you are climbing the towers by spiraling upwards via the outer sections of the tower, though this is contradicted by corridors that appear to pass straight through the middle of the tower. But then, remember that you are not in the mortal realm.

The hallways are home to a number of Daedra enemies, as well as some traps. The enemies are always located in the rooms that connect the various corridors. 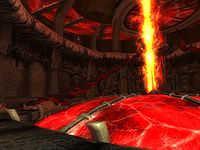 The Sigillum Sanguis is the uppermost room in the main tower. The Sigil Stone that is controlling the Oblivion Gate can be found in the room. Removing the stone will cause the gate to permanently close, after which you are automatically transported back to Tamriel, to where you entered the gate.

Before grabbing the Sigil Stone, you probably want to check The Punished near it, which contain boss-level loot. The Sigil Stone itself is found at the very top of the room, inside of the bright column of flames seen throughout the tower. Be careful not to come into contact with the pillar of fire as it will instantly kill you. Once you take the Sigil Stone the tower will catch fire and will start falling apart around you. After several seconds you’ll be returned to Tamriel. If you walk off of the platform where the Sigil Stone was obtained, it instantly teleports you out.

The words "sigillum" and "sanguis" are Latin. Combined they can be translated into Blood Seal (sigillum -signet, seal, figurine, and sanguis -blood). However, the grammar is wrong: the correct Latin version would be Sigillum Sanguinis. 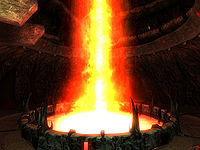 Inside the Sigil Keep

A number of Sigil Keeps can only be found in a specific Oblivion World. When you enter the Sigil Keep in that specific world you will always end up in a pre-determined tower. The towers are: 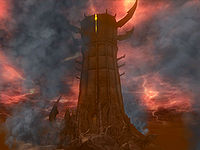 The outside is that of a generic Sigil Keep. Its interior differs per visit.

Random towers are a set of Sigil Keeps from which one is selected randomly when entering a Sigil Keep from Oblivion Worlds 1, 3, 5, 6 and 7. The specific tower is only selected (randomly) when you first enter the Tower Portal door. After that the door will always lead to the selected tower.

You can determine the tower you have entered by the name that appears with the interior map: