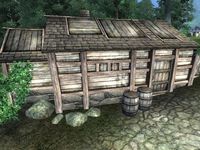 Shafaye's House is a home located on the western side of the small town of Pell's Gate. It is situated across from Irroki the Wide's house.

It is the residence of Shafaye and consists of only one zone, Shafaye's House.

The house is quite small, consisting of only a single room. In the western end are two food barrels, on either side of the door, while six samples of crab meat and a loaf of bread sit on the table. In the eastern side are two barrels, a cupboard and a sack that all contain food. Inside a nearby basket are six samples of ginseng. Shafaye's single bed is placed against the south wall, while another single bed is found along the north wall. A nirnroot plant is placed on top of a chest of drawers next to the second bed.