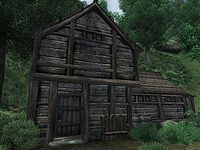 The Roxey Inn is an inn on the Red Ring Road, northeast of the Imperial City (quest-related).

The publican, Malene, buys potions and food while only selling the latter. The ground floor contains a reception area consisting of a counter and a dining room, while the rooms are upstairs. There is also a free bedroll outside, around the back of the inn.