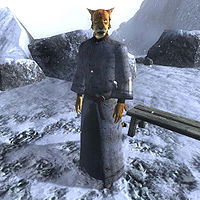 Ri'Jirr is a dedicated follower of Hermaeus Mora and can be found wandering around the shrine day and night.

He wears a tattered robe and a pair of rough leather shoes. He is armed with an iron dagger and carries a small amount of gold.