This is one of seven random oblivion worlds, which can only be entered from a random Oblivion gate. The main tower in this world is one of the five random towers. This is the smallest of the oblivion worlds, in particular because it doesn't have any peripheral towers. There is one random cave system, but it is completely optional.

There are two possible entrances to this world, one in the northwestern corner, and the other on the eastern side (see the section on random oblivion worlds for details on what happens if you decide to use both of the oblivion gates). Both gates have two charred corpses in front of them (the northwest gate, right at its base, behind you). From either gate, just follow the path in front of you towards the one visible tower. There are no obstacles in the way, other than the usual assortment of daedra, dremora, fire towers, mines, and claw gates.

The random caves just lead from the eastern side of the island to the western side of the island. There is no reason to enter them other than to collect extra loot. If you want to maximize your loot, you can enter the cave from both ends and loot twice as many caves (see Random Oblivion Caves for a description of this glitch). There is a boss chest on the hill behind the eastern entrance to the caves, and a fleshy pod along the main road north of the tower.

Those looking for loot may also want to explore the western and southern islands, each of which contains one fleshy pod. A narrow bridge leads west to the first of these islands; a stepping stone walkway leads from the south end of that island to the second one. 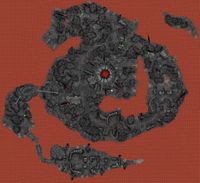