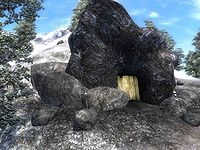 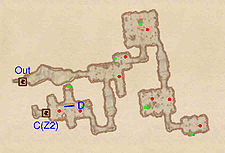 There is one door into this zone and one door leading to Plundered Mine Abandoned Works. In this mine you start in a long passage that leads to a room with two goblins in it. In the middle of this room there is a silver vein, and past the vein and to the left is a minor loot chest next to a broken crate. One chest is hidden behind boards that can be pushed out of the way in the last room of the first zone. If your goal in this zone is to proceed deeper into the mine, then you should go through the corridor opposite the silver vein, which leads to door C. This corridor leads to another room containing two goblins and two minor loot chests. One of the chests is behind the break-away wall at D behind two barrels, while the other is next to the column near where you enter this room. 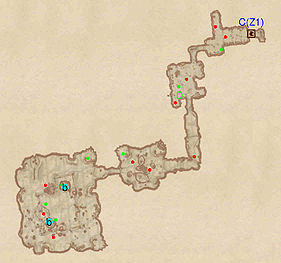 There is one door into this zone, C, which puts you in the same room as two goblins. In the same room there is a minor loot chest opposite the corridor connecting this room to the next one beside a broken crate. There are two more goblins in the next room, with another in the connector leading deeper into the mine. There is a minor loot chest at D that is hidden behind two broken crates, and there is a lockpick resting in a bowl atop one of the broken crates. There is also a silver vein on the opposite wall from D. In the proceeding room there are two more goblins, and there is also a minor loot chest hidden behind two Cairn Boletes in the back right corner. The next room is a large chamber with a depression in the middle, where there are two tents with bedrolls (b) and a Three Feathers Goblin Shaman. The two other goblins in this room are patrolling the perimeter of the depression, so it is recommended to take them out separately from the shaman, if you are able to. On the walkway leading down into the depression there is another dead goblin shaman with a Goblin Totem Staff. Also, there are minor loot chests near both tents; one chest is in front of the farther tent from the connector to the previous room, while the other chest is inside the tent closest to the connector to the previous room.