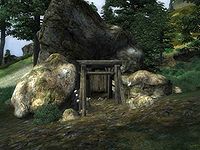 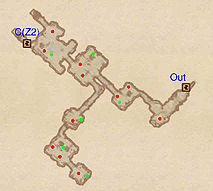 Pillaged Mine is a fairly unremarkable goblin lair which will net you countless fights against leveled goblins with only minor loot as reward. Exploring it is more or less straightforward, although the many goblins can easily group up on you. When entering, you are immediately detected by the first goblin, and the inevitable fight will probably attract the two goblins in the second room. When you reach the semi-large central room, make a u-turn and clear the southern passages for enemies and treasure. Finally, make your way to door C, leading to Pillaged Mine Limestone Works.

Like in the first zone, you will be detected by a goblin the moment you arrive. Jump up to the upper level and loot the two chests and dispose of two additional enemies. Go up the slope to the southwest and don't worry about the Falling Logs (D) waiting for you at the top; the Tripwire trigger (E) is located on the other side, so you may use the logs to your advantage if the goblins are chasing you. Note that the tripwire also releases three Swinging Maces (F), so watch your step. Explore and fight your way through the two southern rooms and claim the minor treasure from the chests, then backtrack to door C, leading back to Pillaged Mine.