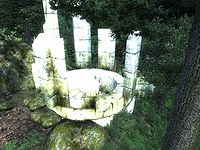 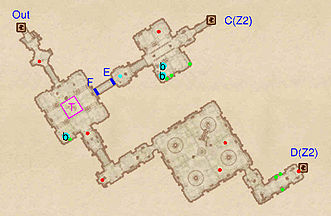 The first room contains a Ceiling Spikes trap at T. The only purpose of this trap is to kill your companion, Fithragaer; the trap will not do any damage to you or other creatures. It is possible to keep Fithragaer alive, as detailed in the quest notes, although doing so prevents the quest from updating properly.

Three bedrolls can be found in this zone: one in the room with the Ceiling Spikes trap and two in the room accessed from door C. 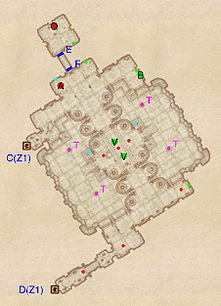 You will enter this zone through door D and exit through door C. To complete the related quest, you will need to find, but not necessarily kill, Mucianus Allias, who is found in the northern-most room at Q. The hidden doors (E and F) that block access to Allias' room are opened using pressing the push block (cyan dot on map) on the wall just west of the doors, which is defended by the boss-level Necromancer (A).

This zone primarily consists of a large room mostly filled by a pool of water. On the walkway across the pool are two Varla Stones (V) in cages. The activation switches to open the Varla Stone cages are both in the water (the two cyan dots) on either side of the Varla Stone platform. Note, however, that there are four Dark Welkynd Stone traps (T) on pedestals standing in the water. The boss-level Ayleid Reliquary is found at B.