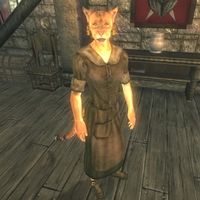 Even if she is the highest-ranking member of the Bravil guildhall, Nahsi is humble by nature and believes in inner peace and spiritual harmony. She sleeps on the third floor every night between midnight and 6am. After waking up, she heads for the ground floor and spends the morning wandering around. At noon she equips her leather armor and heads down into the basement to improve her blade skills on the practice dummy. She returns to the ground floor at 3pm and spends three hours chatting with Tadrose Helas and Vincent Galien before she finally takes a seat at the dinner table at 6pm. At 8pm she gets up and spends the rest of the evening on the ground floor, until midnight, when she returns to the third floor and her bed. She will offer training at all times, except when eating, sleeping or training in the basement.

She wears a set of common lower-class clothing, a collared shirt, green felt linens and buckled shoes. She carries around a set of leather armor, a cuirass, greaves and boots, which she equips during her training session in the basement. She wields a leveled and always enchanted claymore and carries a single iron arrow and a small amount of gold.

As she is nowhere near your typical Fighters Guild-member becomes apparent when she introduces herself: "Nahsi, your humble servant, and humble servant of the Nine. I offer training in the marital arts of Hand-to-Hand fighting." And when asked about Bravil she will elaborate: "The Fighters Guild is good enough to encourage me in sharing the inner peace and spiritual harmony of the martial arts."

Around town, Nahsi is well-known for ability, with citizens remarking "Nahsi is quite a character, and quite an impressive fighter", "If you want to learn a bit about hand-to-hand fighting, talk to Nahsi at the Fighters Guild" and "He's an interesting man, and an amazing fighter." or just asking "Have you ever spoken with Nahsi about hand-to-hand combat?" She is also known for her inner peace and for having a different outlook on life: "Nahsi at the Fighters Guild seems very at peace with himself. He says that's what allows him to be such an amazing martial artist", "I've spoken to him a number of times about inner peace and spiritual harmony. I'm not sure I understood it all", "Is there anyone in Bravil more at peace than Nahsi? And he's such an impressive fighter, as well", and "I always enjoy speaking with Nahsi. His views on the world are different than most."

Nahsi's training has left her with a set of monk spells.