Once you've found and brought the Armor of Tiber Septim to Martin, he'll let you know that the third ingredient he needs is a Great Welkynd Stone. This is a rare Ayleid artifact which - as far as he knows - can only be found in one place: the ruins of Miscarcand. He'll also warn you that the vengeful spirit of the last King of Miscarcand is rumored to guard it even in death. The ruins are marked on your map, halfway between Kvatch and Skingrad. 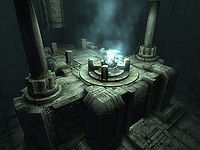 A fairly standard Ayleid ruin dungeon crawl ensues, including undead battling a tribe of Bitterfish Goblins. Details on the interior of Miscarcand are provided on its page.

Once you take the Great Welkynd Stone in Morimath, the King of Miscarcand (a powerful lich) appears in the hall entrance and two Zombie Guardians come up the now raised staircases. Defeat them or run away (although the second option is not ideal - see Bugs). If you do defeat them, there is a shortcut exit that can be accessed through a small room opposite the main hall entrance, which is populated by more Zombie Guardians. Exit Miscarcand and head back to Cloud Ruler Temple.