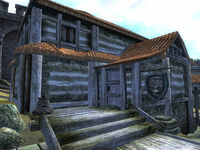 Lelles' Quality Merchandise is a general store located on Anvil's Waterfront. It is found next to The Flowing Bowl and the Harborside Warehouse.

The proprietor, Norbert Lelles, has 800 gold and a Mercantile skill of 40. When bartering, he will buy anything from you while only selling various miscellaneous items, including a pair of Boots of the Eel (a guaranteed magic item). He also sells the unique Apron of the Master Artisan, which fortifies your Security, Alchemy and Armorer.

The main trading room is on the ground floor and consists of a counter and a selection of Norbert's wares on display. He lives upstairs, as is usual with Anvil houses and stores. His private quarters consist of a small dining room and two bedrooms, one of which contains the Boots of the Eel. There is an unlocked door on the ground floor which is accessible from behind the store. 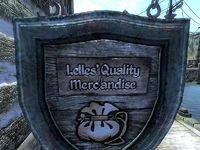