Once you kill Ungolim, Lucien Lachance will run up to you in a rage and demand to know what you've been doing. He says you have betrayed the Brotherhood and must die for it -- but seeing the confusion in your eyes, he reluctantly concedes that you were not involved and tells you that your last few dead drops were not picked up. At some point the real traitor, the puppeteer of this murderous scheme, must have started replacing your dead drops with their own. He lets you know that you have been unknowingly and systematically killing all the other members of the Black Hand. He tells you to go to Anvil and wait by the site of the next dead drop to find out who the traitor is.

Go to the site in Anvil, back up behind the barrel, and wait in sneak mode until a Bosmer named Enilroth puts the Dead Drop orders in the barrel and you receive a new journal entry.

Confront Enilroth. He swears he was paid to make the drops and tells you that the traitor who paid him was staying in the Lighthouse under mysterious circumstances. If you want you can steal or loot the reward for the previous contract (500 gold) from him. Find the lighthouse keeper and obtain the cellar key (via request, thievery, threats, or violence), then head around the side of the lighthouse to open the cellar door.

The cellar is a nightmare, with various dead animals and people strewn about (and even a severed head marked "Mother's Head"). Make your way through the cellar to the locked door; there is a Crazed Dog in the next room. Kill or sneak around it and find the Traitor's Diary. 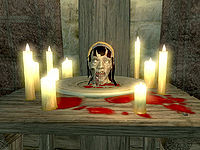 It seems the traitor is actually another member and has been with the Brotherhood since childhood, sitting dormant the entire time waiting for the precise moment to execute a plan inked in blood. The traitor's mother was murdered by Lucien a lifetime ago as part of a contract and the traitor has endured the years growing more insane, conspiring along with his mother's head against Lucien, the Night Mother, and the entire Brotherhood. It is not known why the mother of the betrayer was murdered; the journal seems to hint that it was the traitor's father who originally put out the contract on her.

Now, head all the way northeast to Applewatch Farm to meet with Lucien and explain the monstrosity you've uncovered. Once there, you will find that the Black Hand has tracked down and brutally murdered Lucien, believing him to be the traitor. Arquen approaches you, tells you that the traitor has been dealt with, and proceeds to promote you to Speaker in Lucien's place, presenting you with your own Black Hand Robe and matching Hood. However, because of the collapsing state of the Brotherhood, you and the remaining members of the Black Hand must travel to the Night Mother's sanctuary and seek her advice. Speak with Arquen again between midnight and 3am and ask about the 'Night Mother' to leave for the sanctuary.