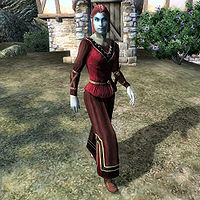 Drarana Thelis is a Dunmer healer living in the town of Harlun's Watch. Drarana will request your assistance in investigating the disappearance of some of her townfolk during the related quest.

Much like her fellow townsfolk, she leads a pretty simple and uncomplicated life, preferably out in the open. She gets out of bed early every morning at 4am, and spends the entire day wandering around town, occasionally talking with her neighbors. She goes back inside her house at 8pm for a two hour dinner before heading to bed at 10pm.

She wears a set of middle class attire consisting of a burgundy linen shirt, burgundy linens and a pair of thick cowhide shoes. Her only other possession is a small amount of gold. She doesn't carry any weapons, relying instead on a series of leveled spells from all of the magical schools except Mysticism.

When Burz gro-Khash gives you the assignment, he mentions something about 'strange lights', an occurrence Drarana is more than willing to talk about: "Hello. You’re from the Fighters Guild, I presume. It’s good you’ve arrived. We need your help with some disappearances. Some folks reported seeing strange lights near the old Swampy Cave. We sent folks to investigate them, but haven't seen them since. We need help. They started appearing a few nights ago. Odd, flickering lights. In the morning, there was nothing to see. But they were there at night." Once you return from Swampy Cave and tell her the bad news, she will be shocked, but also grateful for your effort: "Oh, no! You believe trolls killed them? That’s horrible. Good that you killed all of the trolls, though."