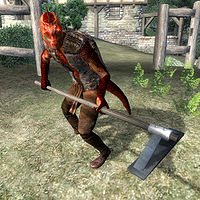 He wakes up every morning at 6am, exits his house, and spends the next six hours wandering around outside, while occasionally chatting with the other townsfolk. At midday, he pulls out his rake and starts working the vegetable garden together with S'mirra and he will keep doing so until 4pm. Afterwards, he will stroll around town for four hours until he finally reenters his house at 8pm. He eats a quick dinner in the upstairs area before finally going to bed at 10pm.

His attire is of lower standard and consists of a huntsman vest, a pair of huntsman leather pants, and a pair of stitched leather shoes. His only other possession is a small amount of gold.