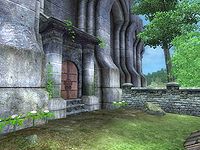 The Restored Garden of Dareloth

Emer Dareloth was the original guildmaster of the Thieves Guild in Cyrodiil, and was the thief who stole the Gray Cowl of Nocturnal over three hundred years ago. After inheriting the Cowl's curse, he passed the cowl down to various later guildmasters, and eventually Corvus Umbranox, the count of Anvil. Not much about him is known after that. His name appears frequently in Oblivion, particularly during the Thieves Guild questline: the Garden of Dareloth in the Waterfront District is where you first join the Guild, and once you become the guildmaster, your quarters are in the remains of Dareloth's House.