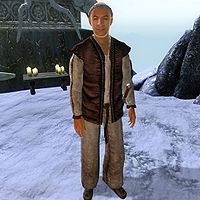 Bruscius Longus is an Imperial priest who is a devout worshipper of the Daedric prince Hermaeus Mora, and can be found with his fellow worshippers at the Shrine of Hermaeus Mora.

Bruscius spends his entire life in the presence of Hermaeus Mora and prefers to sit on one of the benches facing the shrine. At times, he will get up and wander around, or kneel before the three lit candles.

He wears a brown shirt, light brown linens and a pair of pigskin shoes. He also carries an iron dagger and a small amount of gold. He knows a leveled set of priest spells as well as extra major restoration spells.

Speaking to Bruscius Longus before being summoned by Hermaeus Mora will have him mysteriously say; "Between the seen and unseen, the seeming and the being, lies the gulf of ignorance." Afterwards, he will immediately end the conversation, refusing to speak to you further.