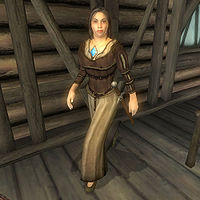 Arnora Auria is an Imperial spellsword who recently had a falling out with her boyfriend, Jorundr. According to her story, he was getting out of control, robbing bigger and more dangerous targets, and she just wanted out.

When asked about Bruma, she'll say "I can't help myself. I'm just a sucker for well-heeled men. That Olav, for example, at the Tap and Tack. He's dreamy. And successful, too."

When asked about Jorundr, she'll reveal information about the two of them. "Jorundr and I have had a rocky relationship at best. Against my will, I've been dragged all over Cyrodiil helping him commit petty crimes. I wouldn't say we're thieves. I mean, we've stolen things... sure. But we've never stolen that much at one time. Just enough to keep us going. That is, until last year. Jorundr started to take risks and began robbing more dangerous targets. Not just lone merchants, mind you. I'm talking about the bigger scores. Like estates and tax shipments. I begged him to stop, as I knew that his capers would one day lead to violence. He just threatened to... hurt me if I got in his way. I think the gold changed him. I really do. He wasn't the man I met seven years ago. The few times I tried to say something, he'd strike me or push me away. I began to become frightened of him." Soon, she'll give more information. "Our last score was a tax shipment being delivered to the Imperial City. We robbed it, and in the midst of the chaos, Jorundr killed a guard. I was mortified. We snatched up the gold and holed up in the mountains. He said if I breathed a word of the murder to anyone, he'd kill me. I was terrified of him at this point. Two days later, the Bruma City Guard traced us to our makeshift campsite. I was off gathering food, but Jorundr was captured. Served him right. When I went back to the site later, the gold was gone! He'd moved it!"

She will also reveal information about her amulet, if you say Jorundr wants it. "That fetcher. He knows this is the only heirloom I have left from my family. Only he would stoop so low."

Arnora sleeps between midnight and 6am. When she wakes up, she has a long three hour breakfast. At midday she goes downstairs to practice her spellcasting, and spends three hours shooting lightning at a target board. At 9pm she has a late supper, and spends another three hours eating. In her free time she wanders around the house, waiting for news on Jorundr.

Arnora wears light brown linens and a brown shirt with a pair of russet felt shoes. She also carries her key, a copy of her amulet, a few gold coins, and a leveled shortsword that is always the best possible quality for your level.