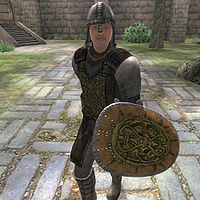 Amminus Gregori is a member of the Cheydinhal City Guard. When an Oblivion Gate opens outside the city, he is sent to keep an eye on it to make sure nothing unpleasant comes out. He disappears from the game after the Main Quest is complete.

If you have not yet completed the Dagon Shrine quest, thus not having any of the associated Oblivion gates opened, Amminus wakes up in the Cheydinhal Castle barracks at 6am every morning. He then promptly begins patrolling the castle's private quarters, which he does for the rest of the day. At 7pm he returns to the barracks for a 3 hour dinner before heading off to bed at 10pm.

After the Dagon Shrine quest has been completed, and the Cheydinhal Oblivion gate has been opened, Amminus wakes up at the Knights of the Thorn Headquarters near Cheydinhal at 12am. He then heads for the Oblivion gate next door and guards it all day until 6pm. He returns to the Knights of the Thorn Headquarters at this time to sleep.

He wears the standard Cheydinhal Guard uniform, a Cheydinhal cuirass with the matching shield and a guard helmet. Additionally, he wears chainmail boots, gauntlets and greaves. In combat, he wields a silver longsword. He also carries a large amount of gold. Amminus knows a leveled knight's spell from the Illusion school.

When approaching the Gate, he will come to you and say the following: "I'd advise you to keep your distance from that accursed portal." Asking him about the Oblivion Gate will result in: "Haven't you heard about these gates to Oblivion opening up all over Tamriel?"

Ask him about Farwil and he'll respond with: "About two days ago, Count Indarys's son, Farwil, entered the Oblivion Gate with six other men. We haven't heard from them since then. The Count fears the worst, and has posted guards here so we can watch and see if anyone comes back out. So far, nothing. At this point, Count Indarys is offering a reward for the recovery of his son from inside the gate... or confirmed news of his demise. If you find him or the rest of the Knights of the Thorn, get them out of there. I'm sure that the Count would be pleased if the gate was closed."

He has some interesting opinions on Farwil Indarys and his Knights of the Thorn. When asked for information about Farwil, Amminus will reply: "Farwil is a Dunmer, and he's wearing steel plate armor. His shield should bear the crest of the Knights. Nothing but the best for the Count's son." Despite this, he seems to care for Farwil, because he'll say, if you've killed Farwil: "Are you mad? You killed Farwil, and now you casually speak to me as if nothing's happened? Begone from my sight before I kill you where you stand!"

Amminus has even stronger opinions about the Knights. He'll remark about them: "Hahaha! Knights of the Thorn! A thorn in our side is more like it! Those fools are nothing but a glorified club. They've never contributed to anything useful, and never will." and "New to these parts, eh? The Knights of the Thorn are a bunch of rabble who fancy themselves true knights. Farwil formed the group around two years ago. They make grand boasts, and talk a good talk, but that's all they are. The real work goes to us, the City Guard. I hate to speak ill of them, as something horrible may have happened, but their own bravado got them into this mess." If you ask, "Why is this behavior tolerated?" He'll snort: "It's tolerated because Farwil is the Count's son. Plain and simple. He has the power and the coin to put it all together. Most of the time, they lounge around the tavern drinking and making up stories of epic battles with impossible odds that they won. It's all garbage. They never patrol, they never help fight off the ocassional bandit that slips into the city. Ah well. I've said too much already."