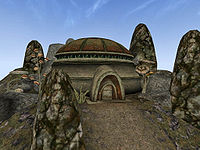 Ald Redaynia is a remote, ruined Velothi tower, located at the western end of the island north of Urshilaku Camp.

This tower contains the Bittercup, a unique artifact which is involved in a Thieves Guild quest. The Skeleton War-Wizard here also holds the artifact Vampiric Ring, which casts a very effective Absorb Health and Fatigue spell on touch. Also be sure to check out the flooded lower level which is well hidden as it appears to be blocked off by rubble. There is, however, a path between the rubble and the wall which only becomes visible when you move to the right of the doorway. A submerged chest full of leveled loot awaits those who find this somewhat hidden area.