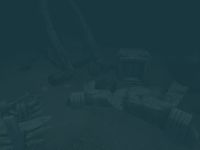 Vanua at the end of the Third Era

Vanua was an Ayleid settlement located along the southeastern shore of Lake Rumare in ancient times. It contains the Shrine of the Crusader, a shrine built to honor Pelinal Whitestrake. It is mainly of Ayleid construction, but some of the interior architecture surrounding the Shrine is built in the Imperial style. The ruins of the settlement were slowly engulfed by the lake over the centuries and it now lies on the lake bed.

Vanua was the site of Pelinal Whitestrake's last stand, when he faced off against the Ayleid demi-god Umaril the Unfeathered. In the shadow of the White-Gold Tower, armies of Aurorans were sent against Pelinal to be slain. When he was weakened, Umaril answered the Divine Crusader's summons, and the two did battle. Pelinal was successful in defeating Umaril, but his soul was protected by Meridia and fled to the Void to one day be reformed in the Fires of Oblivion. Dying, the mortally wounded Pelinal insulted the ancestry of Umaril and of all elves, and his remaining foes fell upon him in anger at his words. He was tormented and cut into eights as a final act of vengeance by the Ayleids, and his head was left in Vanua to be discovered by Morihaus.[1]

Pelinal's followers built the Shrine of the Crusader upon the spot where he died. The Helm of the Crusader, an artifact created for Pelinal by Dibella, was placed upon the shrine. Over time, the waters of Lake Rumare began rise and Vanua was submerged, eventually being forgotten. The ruins were haunted by all manner of undead.

In 3E 153, an elderly Sir Amiel embarked on a final quest to recover the Helm of the Crusader.[2] He was the last Knight of the Nine, an order that had originally been established to recover the Crusader's Relics for safekeeping. He entered Vanua, but was slain by the undead monsters just in sight of the Helm, out-of-reach on a balcony above. In 3E 433, a pilgrim seeking to stop the reincarnated Umaril the Unfeathered was directed to Vanua by the ghost of Pelinal. The pilgrim entered the sunken ruins and successfully reached the helm. The skeletal remains of Sir Amiel led the pilgrim back to the abandoned Priory of the Nine, where a quest to recover the relics and defeat Umaril then began.[3]