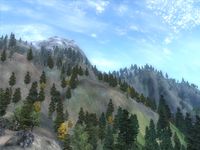 The Valus Mountains seen from Cyrodiil circa 3E 433

The Valus Mountains are a mountain range on the border between Cyrodiil and Morrowind. They meet the Jerall Mountains at the Skyrim border. They are sometimes considered an extension of the Velothi Mountains.

The Hero Hill, a secret shrine to Boethiah, and the ruins of Fort Scinia are some of the many landmarks in the region. The mountains are home to several Ayleid ruins, such as Fanacas and Kemen. The city of Cheydinhal is located on the foothills.[1]

The Valus Mountains form the western border of two regions of Morrowind, Deshaan and Stonefalls. The cities of Kragenmoor and Narsis are located on the foothills.[2]

In 2E 582, a tunnel existed beneath the mountains, which was used by the Oathbound tribe of Orcs led by Gruznak gro-Volkar to enter Morrowind, where they captured a mountain pass called Malak's Maw. They were driven from Morrowind with the help of the Soulless One, who killed Gruznak.[2]