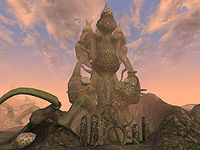 Sadrith Mora ("Mushroom Forest" in Dunmeri) was the district seat of House Telvanni, and home of the Telvanni Council, though only one Telvanni councilor actually lived in town. Sadrith Mora was an island settlement in the Zafirbel Bay, and was accessible only by sea and teleportation.

The actual town of Sadrith Mora was built in typical Telvanni style: great, magically-formed organic mushrooms springing from the ground, each being expanded to suit the needs of the inhabitant; one may have become a dwelling for a single Dunmer, while others formed shops, seaports, or entire inns and taverns. These were grown in a gigantic loop around the tower of Tel Naga, home of Master Neloth. The town itself offered a Morag Tong base, an inn, and a restaurant. North of the Great Market was the Telvanni Council Hall, a large orb supported by giant mushroom stalks. While visitors were technically not supposed to travel beyond the Gateway Inn into the town, nobody really seemed to mind. Anyone would have served you, albeit a bit tersely. One place where foreigners were especially welcome was at the Imperial Fort Wolverine Hall, just to the south.