Guar (or guars) are large bipedal reptilians native to Morrowind and Black Marsh. They are the primary domesticated herd animal of these provinces, and are not usually aggressive. Characterized for their endurance and low intelligence, guar are used mostly as pack animals and beasts of burden, although certain breeds are used as mounts. Although usually associated with the Dunmer, guar have a special relationship with Argonians and the Dunmer traditionally employ Saxhleel slaves as guar-herds and handlers.

The guar is related to the alit, kagouti, and wormmouth, and some scholars argue that the guar is a distant cousin of the Argonian.[1] Despite the name, bantam guar are actually a member of the scuttler family, more closely related to cliff racers than guar. Domesticated guar are regularly seen outside their native lands, and have been imported into Cyrodiil as beasts of burden for hundreds of years.[2] Guar are often raised or hunted for their hide, milk, and meat. 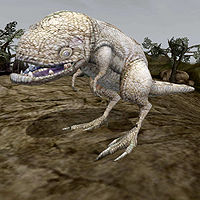 Albino Guar, also called White Guar,[3] are a rare type of guar. They often feature in Ashlander prophecies, and bezoars taken from their stomachs can be used in rituals.[4]

The Banded Guar Charger is a breed of striped guar used as a war mount. They are related to the feral tiger guar.[1]

The Common Vvardenfell Guar is the most common breed of guar. Despite the name, the breed is not limited to the island of Vvardenfell.

Freckled Guar are considered to be the most intelligent breed of guar. They can be taught to come when called, and some can even be house-trained. As such, they're regularly kept as pets in Deshaan.[5]

Golden Eye Guar (or "golden-eyes") are a breed of guar used as a mount. It is a cross between a Banded Guar Charger and a wild guar, known for its difficulty to control and its distinctive golden eyes. Despite the difficulty involved in training one, Golden Eyes are fearsome, loyal, and intelligent.[5] 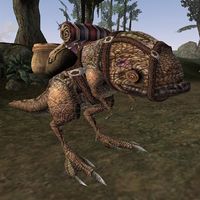 Pack Guar are bred to serve as pack animals. They are often used by traveling merchants and Ashlanders. 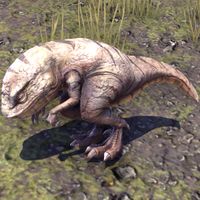 Pony Guar are a smaller species of guar that are rarely exported since they lack the physical strength of their larger cousins. Not well known outside of southern Morrowind, pony guar are usually bred as a curiosity, although some are raised for their meat and skins.[2]

The Striated Pony Guar is a breed of pony guar kept as household pets in Morrowind.

The Tessellated Guar is a multi-purpose guar mount, at home anywhere from swamps to ashlands.

Tiger Guar are a legendary breed of large wild guar, and are a highly prized game animal for noble huntsmen.[6] Found only on the Deshaan Plain, tiger guar are sometimes thought to be nothing more than a Legion myth. The banded guar charger is related to the tiger guar.[1] 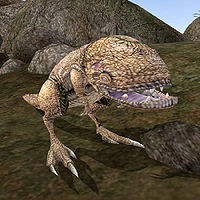 Wild Guar are usually docile, but can sometimes turn feral and attack travelers.