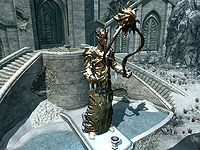 “Anuiel, who was the soul [of Anu and] of all things, therefore became many things, and this interplay was and is the Aurbis. At first the Aurbis was turbulent and confusing, as Anuiel's ruminations went on without design. Aspects of the Aurbis then asked for a schedule to follow or procedures whereby they might enjoy themselves a little longer outside of perfect knowledge. So that he might know himself this way, too, Anu created Auriel, the soul of his soul. Auriel bled through the Aurbis as a new force, called time." — The Heart of the World

Auri-El (also called Auriel[1][2]), King of the Aldmer, is the elven variant of Akatosh.[3][4] Auri-El is the soul of Anui-El, who, in turn, is the soul of Anu the Everything. He is the chief of most Aldmeri pantheons. Most Altmeri and Bosmeri claim direct descent from Auri-El. In Valenwood, he is known as Auri-El Time Dragon, king of the gods.[4] Snow Elves and Ayleids also worshipped him.[5][nb 1] However, Auri-El is thought to be only the ancestor of the upper castes in early Aldmeri society, and was adopted by other Aldmer to better emulate their social "betters".[6] When he formed, time began.[2][4]

"[E]ven Auriel, when told he would become the king of the new world, agreed to help Lorkhan." — The Heart of the World

In his only known moment of weakness, Auri-El agreed to take his part in the creation of the mortal plane, that act which forever sundered the elves from the spirit worlds of eternity.[4] Auri-El and the other gods of the Aldmer were disgusted by their enfeebled selves and what they had created, and insisted that everything was permanently spoiled, and all they would be able to do would be to teach the elves to suffer with dignity.[2]

To make up for his error, Auri-El led the original Aldmer against the armies of Lorkhan in mythic times, vanquishing him and establishing the first kingdoms of the Altmer, Altmora and Old Ehlnofey.[4][2] Auriel's Bow and Auriel's Shield were allegedly created by Anuiel to be used by Auri-El against Lorkhan's hordes. Though Altmora was retaken by men and Old Ehlnofey was sundered, Auri-El's greatest knight, Trinimac (who, in some places, was even more popular than Auri-El[4][7]), succeeded in defeating Lorkhan, and Auri-El hid his Heart by attaching it to an arrow and sending it far into the sea.[2] Later, Auri-El ascended to heaven in full observance of his followers so that they might learn the steps needed to escape the mortal plane.[4][2]

Many Snow Elves had one great desire: to become one with Auri-El. They built the Chantry of Auri-El in the western mountains of modern-day Skyrim so that they could pursue a pilgrimage of spiritual discovery and ascend into the heavens.[8] They would recite the mantras of Auri-El at several wayshrines, meditating on their lessons, before journeying to the Inner Sanctum to ostensibly become one with their god.[9]